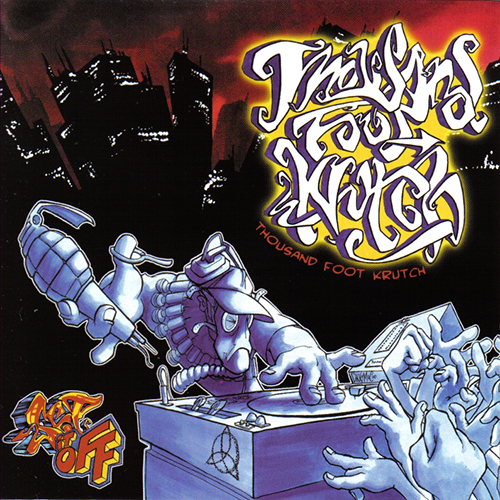 Lyrics
We smashing, thousand be the head of
the class 'n' rollin thru ya party with the
stereo blastin' we creepin' it's bin'
seven since last weekend, everybody in
the club freekin' and in the corner, I can
see ya standin' there, black jacket 'n'
long hair we've been exchanging stares,
'n' I know ya, 'n' what'cha thinkin' yeah
right, wearin' ya clothes air-tight at the
club every night 'n', don't'cha know
that brothers don't like the girls, that be
into the guys that be tellin them lies 'n'
listen here hun, life's more than this, ya
tryin to tell me that'cha never get bored
of this?,

Yo, check this who you eye'in up for ya
set list, frontin' with ya fake gold neck-
lace, not respected, 'n' yet ya wonderin'
why, seen the gleam in ya eyes, as soon
as ya spotted the $, girl what's next?
who you hittin' up for the rolex? broth-
ers need to clear their specs, boy
ya gettin' gamed on, thinkin' she loves
you 'n' all that, need to get it all back,
move on 'n' step off that, she's the
wrong type, but same goes for females,
cuz' guys be spittin' lies, not telling the
details, in the fine print, baby girl, don't
sweat it, cuz one of these days you'll
regret it, and yo, the moral of the story
is, dogs and cats are notorious, for get-
tin' funny around cash money, so lesson
learned, 'n' ya playin' with fire get
burned, respect yourself, peace, kid hope
ya learned

Well it's the Sundance Kid, yo the rap
villain, man for real and, peeps catchin'
feelin's of the lyrical caps that I'm peel-
ing, makin' noise y'all, me 'n' my krutch
boys y'all, stand tall, cuz yo we ain't
never gonna fall, man forget that, yo,
we'll keep constantly comin' right back,
like CHRIST when he rose on the third
strikin' ya nerves take ya down, down,
like Titanic to icebergs, if ya messin'
with a girl for her curves, and yo, ya
might be, you think ya somethin high
and mighty, might be that you be frontin,
most likely, no doubt, money be singin'
the same song, respect yourself hun, it's
the 34th Psalm

And sometimes I feel, so unbreakable,
I'm so forsakeable, I'm shattered, and
things aren't as they seem, they're so in
between, they're so make believe, that
it's un-real, and wake me up when
things are better, cuz I can't take much
more of this and take these rags, but
leave my comfortable sweater, and leave
me alone, then leave me alone, alone,
alone, a-lone